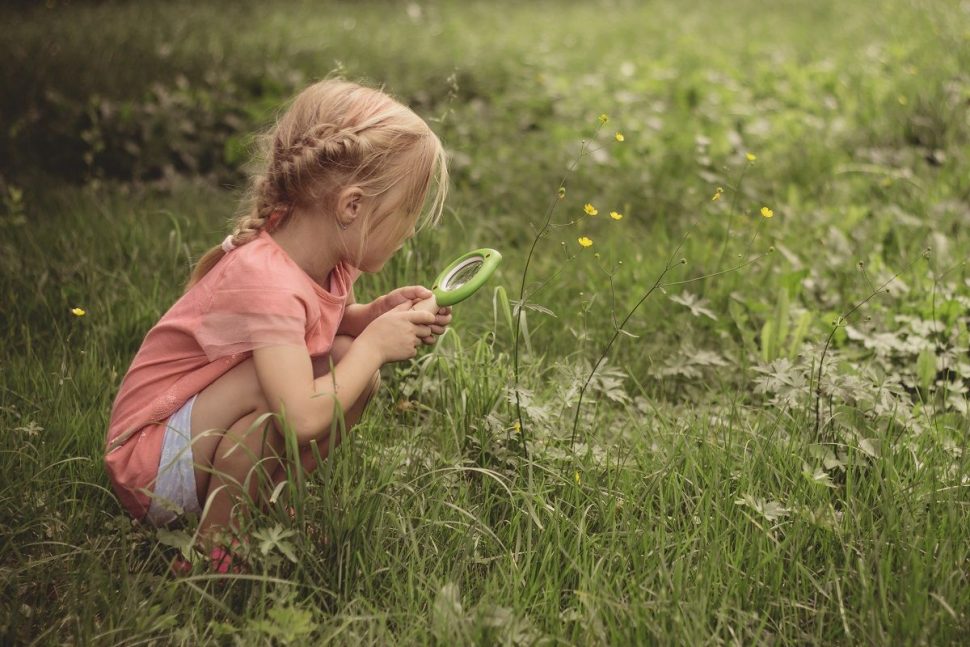 The Montessori approach to supporting the development of imagination and creativity

“Imagination is the essence of the human mind which builds and constructs. Imagination does not develop from what the child hears, but from his own efforts in the natural world.”

From infancy, children show us that they have the potential to understand and imagine a world different from the physical reality we inhabit, and they delight in doing so through play with us. When we roar and pounce at each other like a wild animal, “steal” a baby’s nose, or act out different voices when reading a book, the child is “in on the joke” and enthusiastically participating in the pretense.

Later on, as toddlers and preschoolers, pretend play becomes an ever more important part of their activity repertoire. The child acts out entire scenes and situations, often representing necessary items or other participants with objects, and delights in having partners who play along. Later on in the Elementary years – which in Montessori we know to be the peak years of abstract imagination – they visit entire imaginary worlds through stories, films and above all books, and practice constructing their own.

This unique skill – imagining and pretending – is a key part of human thinking and being. Throughout childhood we develop this immensely powerful mental tool of extrapolating and transforming the world, imagining what isn’t but could be. It is a tool we use countless times every day when we weigh hypothetical scenarios, make decisions after imagining the outcome, even picture ourselves in someone else’s position – the necessary precursor to empathy. And it is also the basis from which problem solving, creativity and artistry stem from.

Naturally, in Montessori we view this innate, universal and essential characteristic of a child with reverence, and actively work to support it by providing it a suitable environment and removing its obstacles. It is especially frustrating then to repeatedly hear the common misconception that Montessori doesn’t allow for, or even disapproves and denies, pretend play.

It is true that Montessori classrooms lack the traditional “pretend play” toys and equipment, like play kitchens and play tools, play castles or stuffed animals. This is not because we don’t value imaginative play – quite the opposite. But we prefer to give the children different tools and opportunities for it.

We know that the child will imagine and pretend as certainly as she will breathe. Just like with expressive art, we believe that directing or coercing this type of play is not helpful, but instead constitutes an unnecessary intervention into the child’s mental life. That we are trained to never do. That’s why you won’t see fairy and pirate costumes, princess castles, or other common fairy tale trappings. What we do have is various open-ended activities and simple but flexible materials that can be used to explore, experiment and yes, represent other things through the child’s own imagination, without the adult’s input. Contrary to popular misconceptions, there isn’t only the one correct way to use the sensory materials. In fact we are careful never to suggest there is such a thing as a correct way – as long as the child isn’t damaging the material or disturbing others, she is free to alter, combine, and come up with entirely novel ways based only on her own imagination. I’ve seen elaborate constructions with the math rods, a Christmas tree constructed of the brown stair and knob less cylinders, or a brilliant balancing game using the spindle rods, each presented with a child filled with the pride and joy of having come up with the unique, creative spin all by herself.

“The power to imagine always exists, whether or not it has a solid basis on which to rest, and materials with which to build. But when it does not elaborate from reality and truth, instead of raising a divine structure, it compresses the intelligence and prevents the light from penetrating.”

We also know that the child’s imagination is firmly rooted in their experiences, knowledge and sensory impressions. After all, one cannot transform and alter without having a foundation for transforming and altering – one cannot build a “castle in the clouds” without having some information about what a castle is, what it looks like and how it feels to walk through one. So we focus on providing each student with a wealth of first-hand information and experiences.

Often, children will play-act scenarios they see around them, but which are directly unavailable, like when a small child pretends to cook alongside his mother in the kitchen. This is something that we offer children through the Practical Life curriculum. Our four and five-year olds don’t need to host tea parties for their dolls because they serve snack and lunch to each other; offer coffee and refreshments to visitors, or host elaborate tea parties for Mother’s Day. Instead of pretending, they can live the situation and base their future imaginings in a more meaningful experience. At the same time, they are gaining practical skills, growing their confidence and developing their sense of self, all of which further enriches their lives, both “real” and the mental life of imagination.

Other times children experiment with pretend social interactions to practice and hone their skills in a safe, low-stakes environment. Our response to that is the Grace and Courtesy curriculum, through which children are given direct lessons on how to handle social demands and are left to practice them until they feel comfortable, such as how to greet and introduce oneself to a stranger, make a polite request, or react a conflict. And in the social environment of the classroom, they have plentiful try on and practice different social roles within the group, organize themselves and others, and practice leadership and cooperation.

Finally, pretend play is often used as a way to process and organize the child’s thoughts and feelings around something that is upsetting or disquieting, such as illness, fears, family disturbances and so on. These often come up in role play or art, or by seeking out stories and narratives that contain related topics. These we observe carefully, ready to step in and offer advice, discussion, support or stories if the child needs us; but also ready to step aside just give the child space if they are dealing with the issue successfully on their own.

We know that self-expression and artistry are a key instrument of imagination and creativity, and that they need freedom and self-directed activity to develop to their fullest. This is why we give children plenty of opportunities to create visual art, dance, sing, move, sculpt, model and so on, and little to no guidance besides how to treat themselves and the equipment safely and appropriately in the process. We don’t assess, evaluate or comment on their creations other than to acknowledge the effort and energy they put in, and thank them for sharing it with us. In doing so, we let their art belong to them alone.

What We Don’t Do

We avoid giving contradictory, conflicting information to children. Knowing that early childhood is primarily a time of collecting, categorizing and organizing their foundational knowledge, we avoid fancies and fabulations that include inaccurate facts – such as stories of talking bears living in a cottage, children flying through the use of magic, and so on. Unless they have a reason not to, children trust us implicitly, and we should honor their trust by offering them honest, useful information.  It is much easier for Elementary students to distinguish the real, the metaphorical and the imaginary, and discern the abstract layers of meaning in parables and fables. We leave this type of storytelling to them.

Meanwhile, when the child shares their imagination with us, we make sure to accept all the manifestations of their creativity. Statements such as “oh, but that doesn’t look very much like a firetruck to me, maybe if you added wheels?” or “that’s not the sound that a bird makes! You sound more like a cat” are not helpful feedback (even though they are often meant well). As people we should remember that our inner life and imaginations are a sensitive, intimate thing, and sharing them is once again an expression of trust that we shouldn’t betray.

Finally, we also don’t rely on the preschool child’s imagination alone in lessons. We remember that the child learns through their own activity, through the work of the hands and the whole body. Learning through listening or seeing alone is the least of their learning, so we focus on experiential learning opportunities that the child directly participates in.

Books are some of the most flexible, useful and rewarding tools to offer the blossoming imagination of the child. They offer new information and experiences that might otherwise be unavailable (such as images and stories from around the world, past and future), as well as assistance in sorting through one’s own impressions and experiences and giving it meaning (especially in books on topics intimately known to the child, such as family relationships or everyday life). Finally, they can provide a wonderful springboard to start conversations between children, or children and adults, on topics that are important to the child and might be difficult to address otherwise.

Our final words of advice would be to select stories carefully: choosing once that are both accurate and beautiful in their representation of the world, and that offer examples and models which you would want the child to emulate. Once again, I would caution to leave fantastic, fanciful or poetic narratives until the Elementary years, when the child can work with and appreciate such things in full, and throughout the early childhood to stay firmly rooted in reality; or, at least, when sharing stories of fantasy with the child, to address the fantastic elements and talk to the child about what was real and what was “just pretend” in the story.

“We often forget that the imagination is a force for the discovery of truth.”