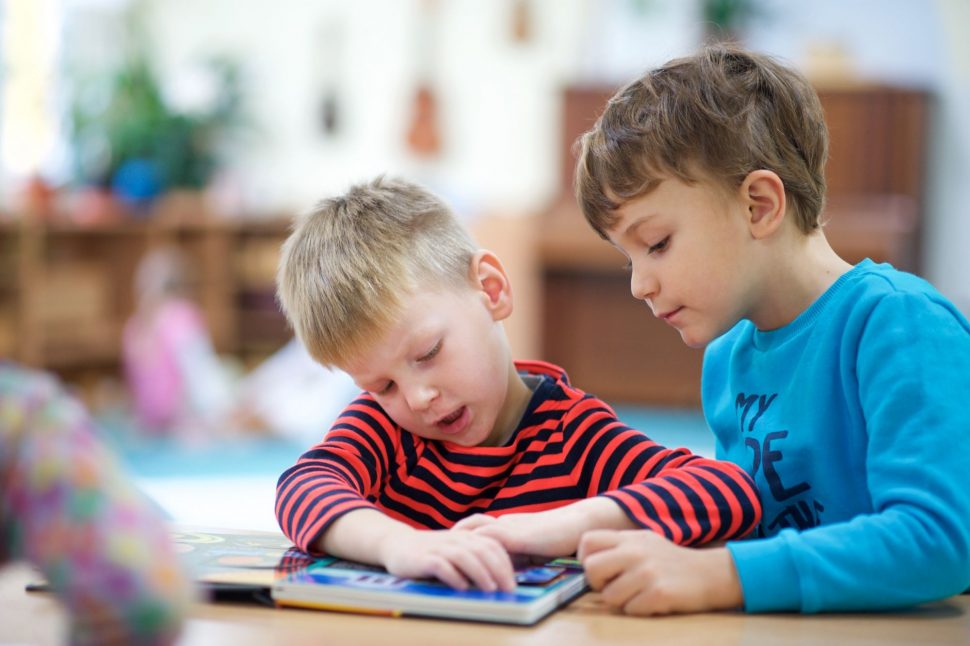 A Montessori classroom is usually home to a three-year span of ages: children from three to six years in the Casa, six to nine years old in Lower Elementary, nine through twelve in Upper Elementary. Why is that?

There is a surprisingly fierce debate in certain educational circles over the benefits of two different approaches: a mixed-age classroom admitting a wider span of ages at the same time, versus strictly age-segregated grades. Currently it seems that in the Primary years, the trend is bending towards multiage groups, but the segregated system rules in traditional Elementary education: mixed classrooms are often tolerated only as a necessity, in very small schools.

In Montessori, meanwhile, we are quite clear that the mixed-age structure is one of the key tools for building the children’s communities we want, at any age: ones that are respectful of the child, encourage freedom and independence, support natural development and promote positive relationships.

That is a lot of promises from a simple policy, isn’t it?

Placement in Montessori classroom is determined not by exact age, but by developmental stage: the larger six-year cycle, broken up into three-year sub cycles, follows the developmental planes of childhood. Each classroom is therefore set up to serve the needs of a large and diverse age span.

We remove the natural tendency to compare or even compete – it is obvious that with a wide span of ages, some children will be quite ahead of others, and it would be nonsensical to try and rank their progress amongst their peers. Instead, our classrooms are built around individuality and flexibility in academic work. Two children can work side by side quite comfortably whilst one is learning to count up to ten and the other is learning the process and notation of adding up thousands and millions. Neither is jealous of each other or feels the need to compare themselves: each is free to follow their own needs without distraction.

Building Both Knowledge and Relationships

The mixed-age community is, however, about more than simply removing the toxic effects of competitiveness. At first through observation, and later on through direct interaction and cooperation, peers become a valuable resource to each child’s education. This is why Montessori does not recommend very small class sizes. Students actively benefit from being exposed to both younger and older classmates, both socially and academically.

Socially, children get to practice and perform distinct social roles: the one of the follower, who is guided and protected by their more experienced peers, and the role of the leader, who uses their greater knowledge in guiding and teaching others. Rather than being stuck in roles assigned by birth order or quirk of maturity, each child experiences a cycle of youngest-middle-oldest in each successive classroom. They learn to both give and receive assistance, and create a flexible self-image and self-esteem that allows them to gracefully and successfully navigate each type of situation.

Academically, the Montessori classroom are special in encouraging peer-led learning: older children offering explanations or even full-on lessons to younger ones. The “teacher” must consolidate and interpret their knowledge, deepening their own understanding; the “student” benefits from instruction from someone who is much closer to their way of thinking than an adult could be, and who is a much more attainable role model, further motivating them.

Of course, the origins of the mixed-age classroom do lie in necessity and historical precedent; like much else in her Method, the genius of Dr. Montessori was in observing, understanding, and interpreting Life, not in reinventing it. It is natural that children live within a peer group that has a wider span of ages: younger and older siblings, cousins, neighbours, friends. As life goes on, even those of us who attended traditional school rarely find ourselves in groups of people the exact same age, whether at home, in the workplace, in society at large.

Rather than classifying ourselves by age, we understand the dynamic of give-and-take between peers who are different but complementary, who each have something to offer each other. We know that in some tasks we need help, and in others we can give it; we can learn from others one day and teach them on another. Our identity and self-esteem is not (should not) be tied to being the best or worst at anything, but rather in engaging and participating in the complex web of interactions we call society.

Just like anything else, however, this understanding is not innate to us, but must be learned, through experience and practice. Montessori schools are intentionally set up to build such learning from the very youngest age.